I ran into an old friend this morning in the line at Caribou. And because I hadn’t seen her in years, I was unshowered, devoid of a stitch of makeup, and wearing whatever was in reach as I rushed to get the kids out the door for school. If I hadn’t been plagued by a kidney stone all night I might have made a quick exit before she noticed me, but I had, and I was just desperate enough for caffeine to forgo vanity in exchange for it.

“How ARE you?! I was so sorry to see your last update.”

She had seen my Caring Bridge update the day before. The one in which I shared that our oldest son had also now been diagnosed with cerebrotendinous xanthomatosis. But, low on sleep, I thought she was referring to my Facebook post about the current battle being waged somewhere between my kidney and my bladder.

Self consciously zipping my coat up higher over my rumpled clothes, “I still haven’t passed the darn stone. Which is why I look like I just rolled out of bed. I did manage to brush my teeth though…you’re welcome!”.

“You have a kidney stone on top of everything else?! You guys just can’t catch a break, can you? I can’t believe everything you’re going through. I’m impressed you’re even out of bed!”

“Oh, it’s been a very long year and a half, for sure. But we’ve been so blessed too!”

Looking at me now like I’ve sprouted a fancy new pair of horns out of my unbrushed hair, “What?”.

“Well, I can tell you that I really can’t think of another thing that would have literally brought me to my knees as swiftly and completely as something happening to my kids.”

Trying to clarify, “Well, my salvation is a pretty big blessing.”

“Oh. Sure.” She was clearly looking for a blessing a little more short sighted.

“I can assure you, if He hadn’t given me the grace to see all the good in this, I am positive I really would be in bed. Curled into the fetal position, drowning in all of the ‘What if’s’ and ‘Why me’s’!”

As understanding passed across her face, the line moved and she grabbed her coffee. “Well, I hope you feel better soon! It was nice to see you. I’ll be thinking of you guys!”.

I was thinking about this conversation after I got home and was a little more awake. She’s not the first person that has commented on my mostly positive outlook. It occurs to me that though I update the Caring Bridge site regularly I’ve tried to keep it strictly about the facts and about the kids. So, I haven’t shared on there WHY I am hopeful and the details on how I know we’ve been blessed. I feel like I could write a book on all the ways He has demonstrated His sovereignty, grace and love to me in the past year and a half.

Let me count the ways He has loved us …

1. My salvation. This is pretty self explanatory. Though He’d revealed the Gospel to me some years before this, and had been working in my life for some time, the surrender of the things I held most dear and my dependence on Him had been slow in coming. Nothing makes a person realize their own limitations like illness!

2. Hope. My hope in eternal life.The knowledge that even if this life under the sun was crazy hard, even if He chose not to heal our daughter, even if one of our other children were effected,  EVEN IF His plan was different than mine, I could hope in my forever home.

12 Blessed is the one who perseveres under trial because, having stood the test, that person will receive the crown of life that the Lord has promised to those who love him.

My hope that no matter what the tests, specialists, and research says, our God is bigger than all of that. That the One who made the heavens and Earth had made these children as well and loved them more than a whole flock of sparrows.

3. Knowledge. Now, I’m not claiming any great IQ or anything, but He did bless me with enough intelligence to wade through hundreds of websites touting words and statistics that would make your head spin. I have a system of printing out research and case studies, highlighting the medical jargon, and translating it into layman’s terms in the margins to be able to go through and read it. I have found, with very rare disorders, that arming myself with information and verifying it with specialists has been highly beneficial.

4. Wisdom. Also, I don’t claim to any great wisdom of my own. He has not only led me to important people and information, but given me the discernment to know what I need to, when I need to know it in order to get the right care at the right time for the kids.

5. Truth. Time and time again He has poured Truth into my life. Through messages at church that seemed directly poured from His lips, to my ears. Through faith filled fellow Believers that have encouraged me and repeatedly pointed me to His word. Life giving bits of love and hope everywhere I looked! Even in the middle of the night, when pain and worry plagued me, He led me to my Bible and my knees.

6. Anxiety. Yes, the anxiety I diligently prayed relief from. So often I confessed to this anxiety, asked for forgiveness for not trusting Him, and begged that He would fill me with faith and peace. But even this, I know He made good. That anxiety fueled many sleepless nights of research, pressed me to dig deeper, look further, and to be diligent and persistent in finding medical answers. I truly believe He left this with me for our good, and His glory. Further evidence? He took it away. We’re not even close to done with hurdles and specialists, and testing, but I was on my way to our last appointment and it was gone. Now, I’m a mom, I still have a Master’s in worry. But not the anxiety that daily threatened panic attacks, headache and nausea and kept me up all night. Just gone. Because it’s no longer for our good, and His glory.

7. His Timing. The blessing of seeing His intricate weaving play out over the past year and a half has been absolutely awe inspiring!! He is The Master Weaver! Some things, of course, were not apparent at the time. But He was always working, whether I saw it or not. Let me share the basics… 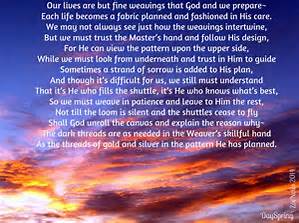 We received her first diagnosis six months ago. That geneticist sent us back to her neurologist .After extensive research, I questioned the amount of symptoms not explained by this disorder and much of the information was from research done by a doctor who was currently at Stanford. When we saw her neurologist he said he had actually worked with this doctor previously and would contact him for his opinion.

The doctor told her neurologist to have us contact the genetic counselor involved with his research, who happened to still be at the University! I ran into a road block trying to contact her via the labyrinth of menu options on their phone system and no one was calling me back. Explaining this to a friend, she said her daughter actually had that same geneticist and genetic counselor when she was diagnosed years ago…and got me her direct phone number. She called me back the next day and after hearing of our daughter’s symptoms, diagnosis, and age, recommended that we continue with the full genetic panel.

We were warned, that patients that had undergone the amount of testing as our daughter rarely got answers from this testing, but it would be a good idea to just make sure that we weren’t missing something treatable, as many of the patients with her diagnosis had multiple disorders. She did. When the results came back, this genetic counselor consulted with a neurologist that had, amazingly, seen two other patients at another facility with this disorder. Since it is extremely rare, 1 in 200,000, and maybe only around a hundred current cases in the United States, we were elated. Until we found out our oldest son had it too. But, this neurologist already knows where to find the medication, that it needs to have special approval by the FDA, and is looking into how to get it to us.

I was led to research that proved to me that the kids diagnosis at 8 and 12 is nearly unheard of. That  because of our daughter’s atypical presentation, our vigilance and persistence, they may be the youngest in the country receiving treatment. They literally don’t yet have a pediatric dose! Average age of diagnosis is 37, when they are disabled by mental retardation or psychiatric problems. Life span without treatment is 40-50 years. Many cases are diagnosed post mortum. Sobering. I don’t know why He allowed this into our lives yet. But I do know that He has given them the best possible chances of a good outcome. We suspected nothing with our oldest until getting Joelle’s diagnosis and reading about it. Without God’s perfect work in carefully weaving this together, we could very easily have had a much more awful outcome. Now, would I have liked Him to cure these babies? Absolutely. But that’s because I can’t see the finished work. We are just a strand in it. But He can, and what a blessing is that?!